DDR German Shepherds come from Deutsches Demokratische Republik, or what was more commonly referred to as East Germany, post World War II. Generally speaking, DDR dogs are characterized by their strong, muscular body, heavy bone construction, and an enlarged head. DDR German Shepherds also have darker pigmentation than their West German counterparts and DDR dogs were bred to retain a greater capacity for work. In short, East Germany produced a dog of a different caliber than West Germany. As a natural consequence of the Cold War years, the two divisions had significant differences, as the East German Communist Party was responsible for German Shepherd pedigree, registration, and breeding. The East German Communist Party in turn made the German Shepherd dog part of its military complex, which demanded an advanced, highly skilled canine. DDR dogs were bred to exude power, athleticism and most importantly, far fewer cases of hip dysplasia, making it a prized breed and the embodiment of efficiency and strength. This is sometimes referred to as a “strong temperament.”

In 1989, German borders were opened and the demand for guard dogs dwindled. In a five month period, 50,000 guards founds themselves dismissed, as the remainder turned their attention to dismantling the borders. Sadly, many of the DDR dogs were sold, abandoned, or put down. As our name suggests, Elite DDR German Shepherd Puppies is dedicated to honoring and caring for these animals. Our staff is determined to preserving their history and legacy. 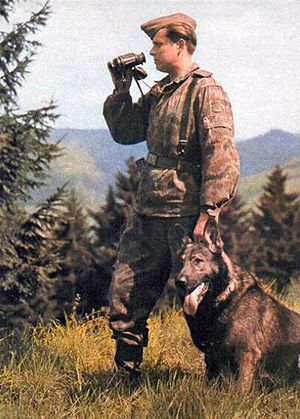